The John Ford Stock Company is the name given to the large collection of actors used repeatedly in John Ford films. Ford delighted in pretending to be a roughneck, but his films show that he was deeply tender and sensitive. He tested people relentlessly, tested their abilities, their temperament, their fears, and above all their loyalty, mostly by abusing them.  If they remained loyal despite his taunts, Ford would reciprocate forever. If they failed, or were even perceived to have failed, he “closed the iron door” on them. It would not do to sentimentalize this man; although Ford’s bark was worse than his bite, he could draw blood and often did.

Here are a few of those who passed muster with Ford:

Maurice Walsh’s “The Quiet Man” first appeared in the February 11, 1933 issue of the Saturday Evening Post.  Ford loved the story and played with a script for years.  In December 1950 Ford hired Richard Llewellyn to write the screenplay and Frank Nugent to do the shooting script.  In Ford’s eyes there was only one actor who could play Sean Thornton – John Wayne, and the only Mary Kate he could envision was Maureen O’Hara. He hired the best in cinematographers, Winton Hoch and Archie Stout. Casting was a nightmare of nepotism, Ford’s two brothers, Francis and Eddie, Maureen’s two brothers Charles and James FitzSimons, Barry Fitzgerald and his brother Arthur Shields, and John Wayne’s four children, Michael, Patrick, Toni and Melinda, all acted in the picture.

If there was a John Ford picture in which he invested a piece of his soul, it was The Quiet Man.

Filmed in the village of Cong, barely a mile away from his father’s family home near Galway, Ireland, Ford worked on this film seriously, diligently and joyfully.

With the exception of The Searchers, The Quiet Man had had the longest after-life of any of Ford’s films. Unlike the Western, however, The Quiet Man has never had to be rediscovered; each succeeding generation has simply accepted the film for the benevolent masterpiece it is, the audience finding the same joy as the film’s hero, as he is, enmeshed in Ireland’s warm greens and desire’s flaming reds. It is a celebratory, festive film. 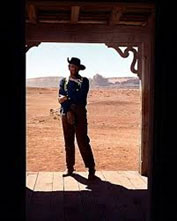 Ford knew The Searchers was something special, he had been longing to do another western for some time.  Production began in Monument Valley in June of 1955 and from the very beginning the mood on the set was serious and the tone intense.

Ford shot the film’s final scene late in the afternoon. Ethan Edwards (Wayne) brings Debbie and Martin home.  They dismount and enter the house leaving Ethan outside.  “It was just a dark doorway,” remembers John Wayne. “I was outside and it was emotional, just me in the doorway and the wind blowing.  I thought of Harry Carey.  He had a stance where he put his left hand on his right arm. He did this incessantly. Ollie Carey was on the set and she turned to look at me.  I just took the pose. The tears poured out of her eyes. It was a poignant moment for both of us, remembering.” 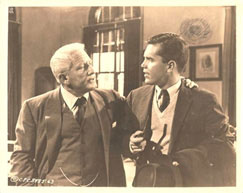 Is a film adaption of Edwin O’Connor’s novel The Last Hurrah.  Ford secured Spencer Tracy to portray Frank Skeffington, a sentimental but iron-fisted Irish-American who is the powerful mayor of an unnamed New England city. In one last no-holds-barred mayoral campaign, Skeffington and his top strategist John Gorman (Pat O’Brien), use whatever means necessary to defeat their opposition.  Ford filled The Last Hurrah with so many old timers that the picture resembled the waxworks scene from Sunset Boulevard.  There was Ricardo Cortez, Pat O’Brien, John Carradine, Basil Rathbone, Donald Crisp, James Gleason, Wallace Ford, Jane Darwell and Edmund Lowe.  If Tom Mix had been alive, Ford undoubtedly would have figured out a way to shoehorn him in as well. 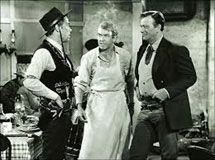 For Ford, born the year after Frederick Jackson Turner delivered his valedictory speech on “The Significance of the Frontier in American History” Liberty Valance represents the true closing of the frontier, both his own mythic frontier and that of the film genre he helped create.  Perfectly balancing the genre’s irreconcilable contradictions, Ford makes a film with populist thrust but an ultimate skepticism about the value of “progress.” In terms of psycho-history, the killing of Valance, a rampant Western id-figure, means the purging of the unbridled force of the libido from the frontier town of Shinbone, leaving in its wake Tom’s coffin, the feeble old Pompey, and the desiccated Stoddard couple.  The wilderness may have become a garden, but it has become poisoned at heart.  Ford strikes this theme from the opening shot of the train bearing the Stoddards back to Shinbone: as the train leaves the frame, Ford lingers a moment on its black smoke hovering over the otherwise pristine landscape, visually showing that “progress” is a polluting force.

Ford baited John Wayne continually on this film, partly from jealously over Wayne’s superior position in the industry, and partly to get Wayne in the right mood to play the alienated and marginalized Tom Doniphon.  What Ford drew from Wayne was an eloquently underplayed performance, sitting back on his haunches doing a bitter-amused counterpoint to the pale, neutral film life around him.

This was the last film Ford crafted that made a profit.

The last gathering of the John Ford Stock Company took place on May 28, 1973.

Ford went to the Motion Picture Country Home and Hospital in Woodland Hills for his final Memorial Day ceremony at the John Ford Chapel.  He mustered up the strength to give the eulogy for the dead of his Field Photo unit. Among those paying their respects at the reception afterward were the ninety-four-year-old Donald Crisp, Anna Lee, Harry Carey Jr., Wingate Smith, and Ray Kellogg.

On August 30, 1973 John Wayne visited Ford and was greeted by “Do you miss Ward?” (Ward Bond had died from a heart attack 13 years earlier in 1960).
Wayne responded, “I sure do, Jack.”
“Well, you’re probably on the deathwatch, anyway,” said Ford.
“No, you’re the coach, you’re the author, you’ll bury us all.”
“Well, I’ll try to stick around a little longer.”
They drank brandies together while sharing jocular memories of Bond and their escapades in making films together.  Keeping up such affability took heartbreaking effort, for as Wayne said later, “It’s rough to put a fellow away that you spent forty-five years of your life with, in close communication.” 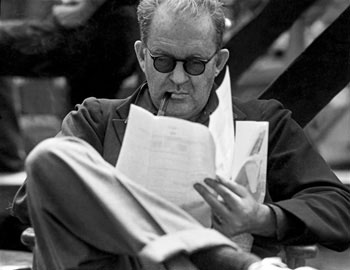 John Martin Feeney, known to the world as John Ford , died at 6:35 pm on August 31, 1973.  Shortly thereafter the bulletin came over the Associated Press wire, hailing him as “the greatest American director of the sound film era, as D.W. Griffith was acknowledged the master of the silent movie.”

Through a career that spanned seven decades, John Ford managed to leave as his legacy a body of work that few filmmakers will ever equal.  Basically shy and intensely private, Ford was brilliant, stubborn, witty, irascible and contradictory.  He preferred to let his films speak for him, and the message was always masculine, determined, romantic (but never soft) and unmistakably “American.”

This is the filmography (story) of a saloonkeeper’s son from Maine who helped to shape America’s vision of itself, and created a monumental body of work, including films that earned him six Academy Awards – more than any filmmaker before or since. 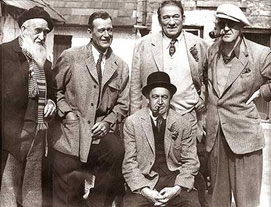