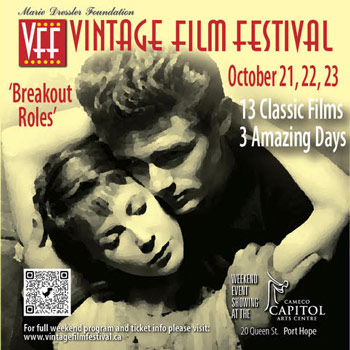 on October 21st, 22nd & 23rd! Buy tickets here: a full weekend pass for $79 admits you to all 13 movies, as well as Sunday's lunchtime talk: "Dangerous Dames: Celebrating the Women of Pre-Code Gangster Films". Single tickets are just $10 per screening, or free at the door for anyone 25 or under. And the popcorn is free for everyone, all weekend!

The theme of this year's program is "breakout roles": those performances that transformed actors into movie stars, that lifted them into the ranks of the A-list, that boosted them onto a new plateau of celebrity! See the full program here: there is definitely something for everyone! Every decade from the Twenties to the Seventies is represented, as well as a huge range of vintage film genres: melodrama, gangster, horror, screwball comedy, film noir – as well as classic drama and comedy, and even something for the young people. As usual, we've made sure to share a musical, a foreign film offering, and two silent films which will be presented with live piano accompaniment.