This iconic horror film follows the obsessed scientist Dr. Henry Frankenstein (Colin Clive) as he attempts to create life by assembling a creature from body parts of the deceased. 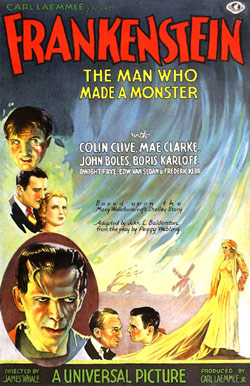 Aided by his loyal misshapen assistant, Fritz (Dwight Frye), Frankenstein succeeds in animating his monster (Boris Karloff), but, confused and traumatized, it escapes into the countryside and begins to wreak havoc. Frankenstein searches for the elusive being, and eventually must confront his tormented creation.

Adapted and updated from Mary Shelley's story, Dr Frankenstein assembles an re-animates a creature from dead human tissue, only to reject it after he is successful. Mistreated by(almost) sundry, the 'monster' becomes an angry outcast hunted by the community. 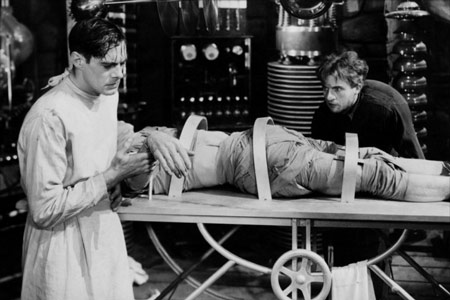 The most important horror movie ever made, with Boris Karloff joining the immortals as the flat-headed, big-booted, sad-eyed monster - whom director James Whale made a resonant figure by dressing him up like one of the scarred WWI veterans then on the skids all over America. Colin Clive's neurotic mad scientist and Dwight Frye's hunchbacked brain-dropper collaborate on the making of a man, but the innocent turns savage when mistreated by all and sundry.

Besides Karloff's still-heartbreaking mime, the film offers wonderful Gothic sets, a cracking laboratory, Whale's slyly camp gallows humour, a torch-bearing peasant mob and many other images that resonate through the years.

Released in 1931, "Frankenstein" begins with a "friendly warning" to all viewers: "It will thrill you. It may even shock you. It may even horrify you. So, if any of you feel that you do not care to subject your nerves to such a strain, now's your chance to, well—we warned you." With an opening like that, you know it is a horror classic.

I am sure that you are familiar with the tale of "Frankenstein." A mad doctor creates a creature from the bodies of the dead, bringing to life a horrifying monster that goes on to terrorize the village. 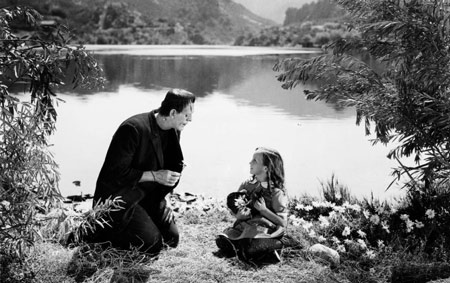 It is astonishing how deeply engrained this film is in our cultural consciousness. The word ‘Frankenstein' immediately conjures images of a big green monster with a flat square head and bolts in its neck. While ‘Frankenstein' actually refers to the mad scientist, Dr. Frankenstein, the fact that the name is now synonymous with the monster is a testament to the film's impact.

The movie is filled with iconic scenes and set pieces. The opening graveyard scene, the hunchbacked assistant, the laboratory, the mad doctor screaming, "It's alive!" amidst crackling electricity—this movie has played such a defining role in contemporary horror culture that these scenes almost feel clichéd.

Boris Karloff receives the most recognition for his portrayal of the infamous monster. The slow shuffling gait, the empty eyes, and the deep moans are all deeply linked with our collective imagining of Frankenstein's monster. However, the best performance of the film comes from Colin Clive as the mad scientist Henry Frankenstein. His actions skitter along the boundaries of madness and he lights up the screen in every scene. 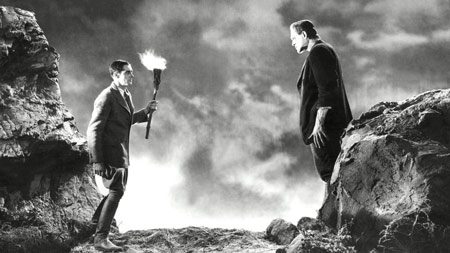 In contrast to a film like "Dracula" (1931) with a clearly defined struggle of good versus evil, "Frankenstein" is similar to a Greek tragedy. The audience is forced to grapple with ideas such as the destruction of innocence, mob mentality, and the monstrous ‘other,' a concept that can be linked to all forms of xenophobia and racism. We also see man's inability to control the technology that he has created. This topic is all too evident in our 21st Century world.

In this way, the film draws on the sympathetic and philosophical elements of the novel, while imbuing the story with gothic atmosphere. By taking liberties with the story, this horror movie classic and Mary Shelley's literary masterpiece can be enjoyed as separate entities, both adding to the story of Frankenstein.

Is it still scary? No. The lack of dramatic music and Karloff's slow shuffle cannot compete with modern scares. Is it an iconic horror staple? Yes, without a doubt. Still holding up 90 years later, it is a perfect Halloween watch.