In the early 1900s, Fanny Brice was the toast of New York, a singer and comedian who lit up the stage with her appearances in the Ziegfeld Follies show. 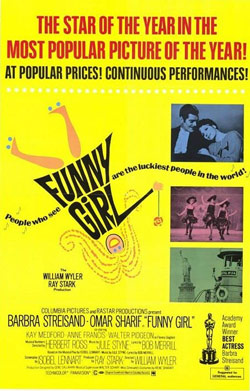 Beginning in the days before she was discovered, "Funny Girl" charts Fanny's rise to fame as she goes from struggling immigrant to internationally renowned artiste in the space of two and a half hours.

Life in the public eye is hard, though, and Fanny soon finds that the ups and downs of showbiz are nothing compared to the difficulties of managing her private life - it's not long before her relationship with gambling playboy Nick Arnstein (a very young and handsome Omar Sharif) gets her into trouble.

Barbra Streisand established herself as a major Broadway star in the stage musical "Funny Girl," for which she won a Tony Award nomination, and she went on to become a movie star after the play was made into a movie by William Wyler, in 1968.

Director Herbert Ross, who later directed Streisand in the (disappointing) sequel to "Funny Girl," "Funny Lady", held that Streisand was extremely lucky to make her film debut in "Funny Girl": "Having had the advantages of playing Fanny Brice for two years on Broadway, Streisand knew her role inside out. It was the perfect part for Streisand, ideally suited to her range as an actress and singer."

Streisand plays Fanny Brice, the Jewish "ugly duckling" in early nineteenth century New York City, driven, like many working-class girls at the time, to be a star, and get out of the Lower East Side ghetto. 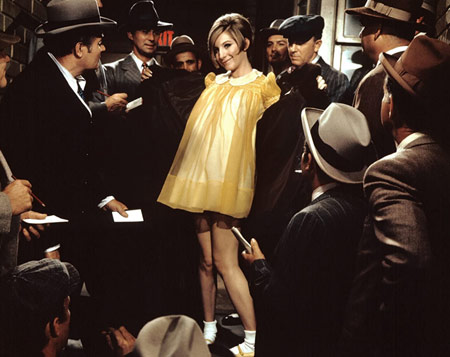 Brice's big break comes when she meets the handsome, charming but irresponsible gambler Nicky Arnstein (Omar Sharif, who got a lot of publicity due to the fact that he was Egyptian and Streisand Jewish). Nonetheless. Arnstein introduces Brice to the influential impresario Florenz Ziegfeld (Walter Pidgeon), who hires her for his show, "Follies."

The rest is history and Hollywood showbiz formula, with the usual rise to fame, setbacks in personal life, tumultuous marriage, comeback, and lots of suffering. Nonetheless, Streisand rises above the format and its stereotypes, proving that she is a mega-star, as Fanny Brice and as herself.

I wish William Wyler did a better job of staging the production numbers and show more humor, but this was his first musical, and it shows. Too bad that George Cukor ("Star Is Born") or Vincente Minnelli ("American in Paris," "Gigi") were not hired for the job

Streisand joined a group of Best Actresses who have won the Oscar for an acclaimed stage role with which they were intimately connected, including Judy Holliday ("Born Yesterday"), Shirley Booth ("Come Back, Little Sheba"), and Anne Bancroft ("The Miracle Worker").