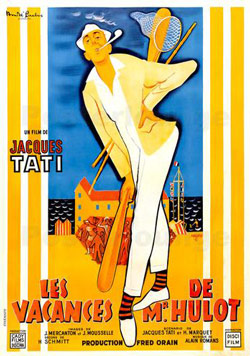 heads for the seaside. Hulot is something of an innocent. Pretty well everything he touches goes bad but he is oblivious to the havoc he creates everywhere he goes. Whether it be eating in the dining room, painting a boat or playing tennis, his life is an adventure for everyone around him.

Tati also co-writes (with Henri Marquet) and directs this adorable movie in 1953. The film was hugely successful, with over five million cinema admissions at home in France, and it earned an international reputation for both its creator and his character. The good-natured, pipe-smoking but incomparably gauche character of Monsieur Hulot went on to appear in Tati's subsequent films Mon Oncle (1959), Playtime (1967), and Traffic (1971).

Spoofing Marxist intellectuals, local proprietors and silly dilettantes, Tati's comedy proposes the value of relaxing and enjoying life in a carefree, happy world where simple pleasures can be relished and idiot modern technology mocked and ignored. 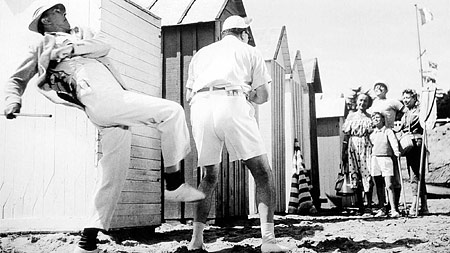 Tati's iconic character Monsieur Hulot is a total delight and his revival of the lost art of pantomime comedy of the silent movie era days is a guaranteed civilised pleasure. Despite the relegation of spoken dialogue to the background, the film is not at all a silent comedy, employing natural and man-made sounds for comic effect and character development. It also has a jazz score by Alain Romans.

It was shot in the town of Saint-Marc-sur-Mer, on the edge of the industrial port of Saint-Nazaire. A bronze statue of M Hulot was later erected overlooking the beach where the film was made. Tati said Saint-Marc-sur-Mer was 'neither too big nor too small, a sheltered inlet, with a graceful curve of sand, it boasted a hotel on the beach on which the main action could be centred. Beach huts, windbreaks, fishing boats and outcrops of rock helped to complete a picture which was all the more idyllic for being so unspectacular.'