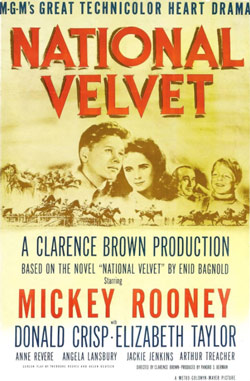 With Taylor as the increasingly wily trainer and Velvet as the makeshift jockey, Pi's chances of pulling off a momentous victory slowly increase.

MGM's lavish adaptation of Enid Bangold's evergreen novel is an at times winsome but nonetheless enjoyable yarn that remains a popular favourite among adults and children alike, dealing as it does with the notion of endeavour and the conviction of pursuing one's dreams. Director Clarence Brown certainly knows how to push all the right buttons, crafting a film that is knowingly manipulative and sentimental but none the worse for it and it would be churlish not to be both moved and excited by the film's gripping finale.

Both Taylor and Rooney give without doubt the best performances of their pre-adult years but there's also much pleasure to be had from a stellar supporting cast including Angela Lansbury as Velvet's older sister. 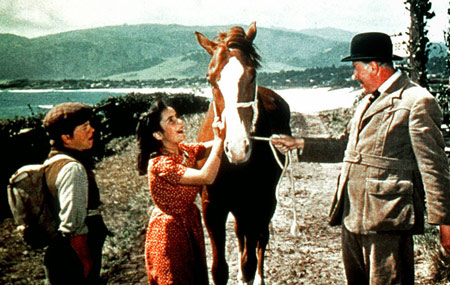 The winsome horse story family film is based on the bestseller by Enid Bagnold and is written by Helen Deutsch and Theodore Reeves. Elizabeth Taylor is the 12-year-old, who has a starring role after bits in Lassie Come Home (1943) and The White Cliffs of Dover (1944). Liz plays Velvet Brown, someone who adores an unruly sorrel gelding named The Pie she won in a village raffle and rides him to victory in England’s Grand National Steeplechase disguised as a boy (Liz does her own riding). Unfortunately she collapses after the race from exhaustion and the track doctor soon determines the jockey’s true sex. The Pie is disqualified, but Velvet is not prosecuted as she’s heralded by the English public as a hero and earns the nickname “National Velvet.” Clarence Brown (“Plymouth Adventure”/”Idiot’s Delight”/”Anna Karenina”) is the veteran director, who handles things with kid gloves.

Mickey Rooney plays the brash drifter Mi Taylor, a headstrong English ex-jockey. After a serious accident cut short his career, Mi has become embittered and plans to steal from the English country home in Sussex of the Brown family, but changes his mind after they take him into their house and give him a job as a delivery boy for their thrifty butcher father (Donald Crisp). 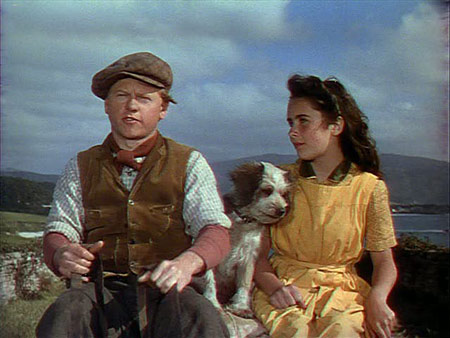 Mi will stay on to help Velvet train the horse. Velvet’s mom (Anne Revere) has a soft spot for Mike’s deceased father, who trained her to become the first woman to swim the English Channel. That’s something Mi doesn’t know, and will have to wait until after the big race to find out.

Though the film suffers from too much sentimentality and lapses in credibility, the heralded children’s classic offers great production values, a warmly told story and a chance to see the later superstar Liz as a vibrant youngster giving a satisfactory natural performance.

National Velvet won a total of five Academy Award nominations, including one for Brown as Best Director; and two Oscars — for Anne Revere as Best Supporting Actress as Velvet’s understanding mother and Robert Kern for Film Editing (the editing for the big race is superb).