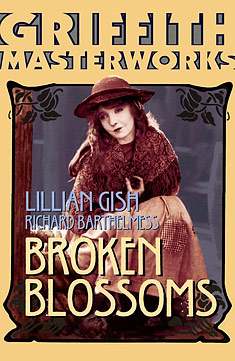 When Chinese immigrant Cheng Huan (Richard Barthelmess) moves to London to spread Buddhism, he is unprepared for the deplorable conditions and intolerance of its inner city. But Huan succumbs to his environment; his missionary dream turns into indifference and opium addiction, until he finds battered Lucy Burrows (Lillian Gish) at his doorstep. He devotes himself to her recovery, and the two kindred souls become close, but tragedy awaits in the form of Burrows' abusive father (Donald Crisp).

Based on The Chink and the Child by Thomas Burke - 1917

Tremendously downbeat, but beautifully stylized, D.W. Griffith’s Broken Blossoms certainly hasn’t aged immaculately. Set mainly in a London slum, this unabashedly manipulative melodrama tells the story of a Cheng Huan, young Chinaman who falls in love with Lucy, a fifteen-year-old über-waif (played memorably by Lillian Gish, who was 23 at the time of filming), with tragic results.

Because the film predominantly deals with racial relations between the Londoners and the foreigner, things often feel a bit off. For example, after a touching scene where Cheng nurses Lucy back to health following a severe beating, she affectionately calls him “Chinky.” Yikes!

My politically correct sensibilities kicked into overdrive at that one (not exactly an isolated incident here, either), hoping that we were supposed to note the irony of this girl, faced with the kindness of a singular individual, still classifying him arbitrarily by his skin color, but the comment slides by unchecked. That Griffith supposedly made this film partially as a retort to those who claimed his dubious masterpiece The Birth of a Nation was racist is a mind-boggling example of how much our perceptions of such things have changed.

Still, the film’s frequent bouts of violence are tremendously effective when placed against the general tenderness that permeates this ghetto. The raging face of Battling Burrows, the piece’s villain, as it moves in to strike is absolutely terrifying, and there’s always a threat of harm hanging behind the misty landscape that Griffith paints.

The fog that covers the streets of London seems to cloud the minds of those who live there. The cast is comprised of uncouth creatures but a Victorian sense of propriety weighs heavily upon them. They are punished for indulging themselves, since their transgressions step outside the realm of some arbitrary sense of decorum. Most of the citizens here are too high on opium or too obsessed with bloodthirsty boxing matches to notice the inner beauty of the heroine, and that might be the greatest tragedy that’s served up. Griffith seems to genuinely admire the transformation of the lead from idealist Buddhist, to resigned merchant, to Zen avenger, though the overly poetic intertitles sometimes keep things from being readily apparent (and the way that he creepily places Lucy on an altar once he gets her makes things even more ambiguous). It’s to its credit that for all of the seriousness that’s bandied about, Broken Blossoms rarely feels like a preachy “issues” movie. The horrible tragedy that Griffith serves up can be seen coming from the first reel, but it has an indelible and undeniable power when it finally arrives.