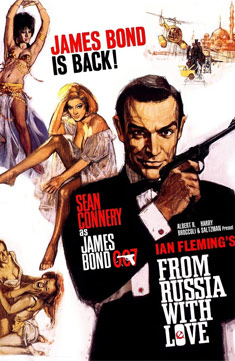 Agent 007 (Sean Connery) is back in the second installment of the James Bond series, this time battling a secret crime organization known as SPECTRE. Russians Rosa Klebb (Lotte Lenya) and Kronsteen are out to snatch a decoding device known as the Lektor, using the ravishing Tatiana (Daniela Bianchi) to lure Bond into helping them. Bond willingly travels to meet Tatiana in Istanbul, where he must rely on his wits to escape with his life in a series of deadly encounters with the enemy.

Based on the novel From Russia with Love by Ian Fleming

From Russia with Love, along with its successor, Goldfinger, represents Bond at his best. Although the series has run for more than thirty years with seventeen "official" entries, it has yet to better, or even equal, what it achieved in 1963-1964 with the release of these two films. By combining solid storylines, tightly-paced action sequences, memorable villains, and Sean Connery in top form, Russia and Goldfinger mark the cinematic apex for Ian Fleming's 007. 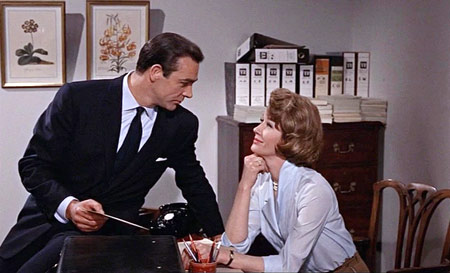 The elements of From Russia with Love move the movie closer to the recognizable "Bond formula" than was the case for its predecessor, Dr. No. Here, the action scenes are more numerous and generate added tension, the title sequence has a familiar flavor, John Barry's distinctive score replaces the workmanlike music of Monty Norman, Q makes his first appearance, and Connery tones up 007's sophistication while downplaying his cold-bloodedness.

Unlike the megalomaniacs in later Bond films, the villains in From Russia with Love aren't after world domination (at least not immediately). In fact, they want something significantly less ambitious: a Russian decoding device. Two of SPECTRE's top operatives are on the mission: #3, former KGB agent Rosa Klebb (Lotte Lenya), and #5, Kronsteen (Vladek Sheybal), a chess master who has meticulously plotted every move and weighed all alternatives. The pair reports directly to the mysterious #1, Blofeld, whose face remains hidden until You Only Live Twice.

Kronsteen's manipulative plan involves using Bond and Russian cipher clerk Tatiana Romanova (Daniela Bianchi) as pawns. Once the British agent has obtained the decoding device from Tatiana, SPECTRE thug Red Grant (Robert Shaw) is to take it from him, leaving behind a corpse. The plot is suitably complicated (but not so convoluted that the viewer will get lost), and, even though 007 suspects a trap, the lure of a beautiful woman and a valuable espionage coup is too enticing to resist. So he travels to Istanbul, where Tatiana has arranged to meet him. 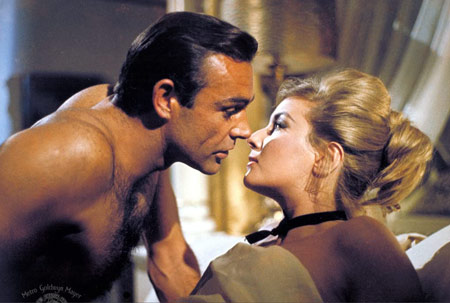 Connery, who felt his way through parts of Dr. No, has mastered his character by this outing. He acts the role with confidence and familiarity, easily establishing his reputation as the inimitable 007. He is surrounded by an interesting supporting cast that includes Miss Universe 1960, Daniela Bianchi (whose voice was dubbed over), and Lotte Lenya as an especially vicious adversary. Playing his part with the perfect combination of toughness and sly wit, Pedro Armendariz (in his final acting appearance) is delightful as Kerim Bay, Bond's Turkish ally.

From Russia with Love is among the most tightly-plotted of all the Bond films, and, as a result, is one of the shortest. It moves briskly, blending intrigue, romance, and action into an immensely satisfying whole. Russia exudes style, as typified by a fight in a gypsy camp where Bond offhandedly dispatches rogues to the strains of John Barry's "007 theme". This movie has several such memorable moments, including an inventively choreographed fight sequence with Bond and Grant going at it in the confined space of two train compartments. Shortly after that, there's a death-defying chase between Bond and a helicopter.

Standing at the pinnacle of the series, From Russia with Love shows how good a Bond film can be when all the ingredients mesh. This movie isn't just a fun popcorn-munching action adventure flick; it's a good motion picture by any standards.