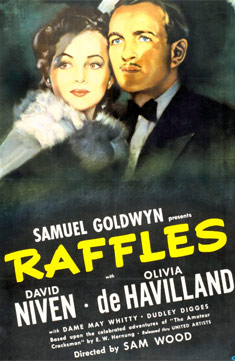 Raffles (David Niven) is a top-class cricketer by day and a master criminal by night. He is responsible for a string of daring crimes across London as the "Master Craftsman", taunting Inspector Mackenzie (Dudley Digges). However, Mackenzie gets a clue. Raffles is planning to steal the jewels of Lady Melrose (Dame May Whitty) in order to raise funds for his out of luck chum Bunny (Douglas Walton). Raffles and Bunny are guests at the home of Lord Melrose (Lionel Pape) along with Gwen (Olivia de Havilland), Raffles' new love interest. Mackenzie also invites himself to the house. 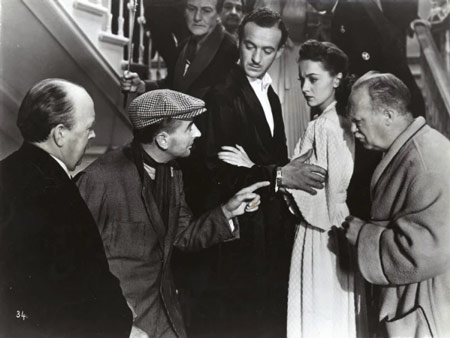 The gentleman thief Raffles meets up with his old school chum Bunny Manders (Douglas Walton), who reintroduces him to his socialite sister Gwen Manders (Olivia de Havilland), with whom Raffles was infatuated a decade earlier. And Raffles soon falls in love with her again.

But later, at the country house party of Lord Melrose (Lionel Pape) and Lady Melrose (Dame May Whitty), Raffles steals Lady Melrose’s necklace to help Bunny get out of a bad gambling debt. Is Scotland Yard’s man Inspector Mackenzie (Dudley Digges) clever enough to catch him?

The 1940 Raffles is a close rejig of the 1930 Ronald Colman-starring version of Raffles, with the sequences and dialogue virtually intact, and with the same producer (Samuel Goldwyn) and some of the same backstage personnel, notably cinematographer Gregg Toland.