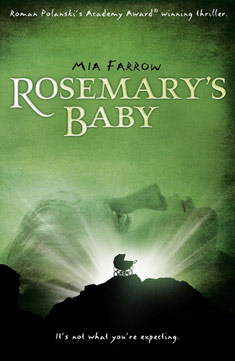 A young wife comes to believe that her offspring is not of this world. Waifish Rosemary Woodhouse (Mia Farrow) and her struggling actor husband Guy (John Cassavetes) move to a New York City apartment building with an ominous reputation and odd neighbors Roman and Minnie Castavet (Sidney Blackmer, Ruth Gordon). When Rosemary becomes pregnant she becomes increasingly isolated, and the diabolical truth is revealed only after Rosemary gives birth.

I have long been of the opinion that the scariest things are those that you cannot see. This is especially true in film. Films that constantly show whatever it is that is terrorizing the main characters are rarely frightening. On the other hand, leaving this unspeakable evil, so to speak, to the imagination helps a film to succeed in ways that applying copious amounts of makeup and adding various special effects cannot.

Roman Polanski's Rosemary's Baby is an exercise in not showing the 'beast' outright. In fact, the one scene which contains supernatural elements of any sort is conveyed with a dreamlike quality, making it feel very separate from the rest of the film, which is normally in possession of a very level-headed tone. Polanski understands that outright 'horror' is rarely truly horrifying. He uses the 'turn of the screw' method in which each new piece of the puzzle leads down a road that the characters (and viewers) would rather not travel. What is frightening about this film is not the presence of ghouls which pop out of the woodwork and scream "ooga booga", but the fact that that the audience is aware of what is happening from the start, and they are unable to stop the inevitable. 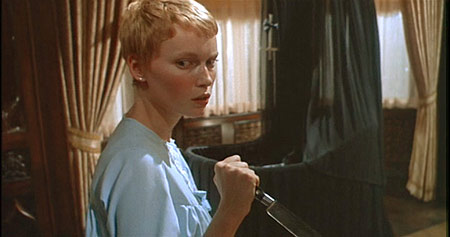 The plot is probably common knowledge by now. Rosemary and Guy Woodhouse, an attractive young married couple, move into a beautiful Victorian apartment building, and Rosemary becomes convinced that the nice old couple living next door are followers of Satan who are trying to steal her unborn baby.

It is a horrifying premise that is addressed very matter-of-factly. It never seems ridiculous to believe that these people are who they are, it is simply accepted. The various clues that reveal their true agenda are distributed evenly throughout the two-plus hour-long film, making its pacing quick and swift, defying the viewer to lose interest or to even take their eyes off the screen for one second.

The cast contributes immeasurably to the film's believability. Mia Farrow is never unconvincing as Rosemary, bringing the necessary naïveté to the character without ever making her seem ridiculous. Her appearance here announced her to the movie going public as a viable dramatic actress, a performance of a high level of brilliance that she has yet to repeat.

As a contrast to the previously-untried Farrow, stage and screen veteran Ruth Gordon delivers one of the great supporting performances of all time as the nosey Mrs. Castevet. Our reasoning behind the belief that this woman could be completely evil lies in Gordon's performance. She presents Minnie as the stereo-typical neighbor from hell (literally), infusing her with a barrage of personality tics and enough humor to keep the film from ever being too heavy, and yet she is also able to make it known at all times that this woman has her own agenda and will not deviate from her decided course of action. She makes this known not through knowing close-ups or an added intensity to her line readings, but through the many layers of character that she incorporates seamlessly into her every scene.

The rest of the cast is pitch perfect, with veterans Sidney Blackmer (having just the right touch of a fatherly kindness mixed with an sense of menace to his performance) and Maurice Evans (in many ways the film's conscience as the one person who is on Rosemary's side) being among the standouts.
Rosemary's Baby is a truly perfect film in all respects. It contains two brilliant performances, topnotch technical aspects, and a taut script directed by one of the great filmmakers of the latter half of the 20th century. Now how many horror films can say that?