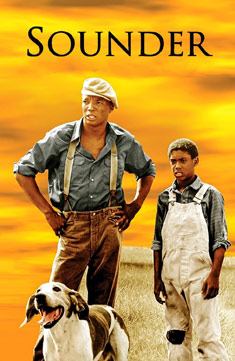 The Morgans, a family of poor black sharecroppers in the Depression-plagued South, struggle to find enough to eat despite the help from their hunting dog, Sounder. When father Nathan (Paul Winfield) resorts to stealing food, he is captured by police and sent to prison, and his wife, Rebecca (Cicely Tyson), is left to care for their son, David (Kevin Hooks). Though Sounder has run away, David never gives up hope that his dog will return, just as he believes that he will see his father again someday.

Based on the 1969 novel of the same name by William H. Armstrong.

Think about what our children see in today’s family movies: Lives of relative abundance, people with nearly universal access to homes, cars, full cupboards, electronic devices spilling out the doors. 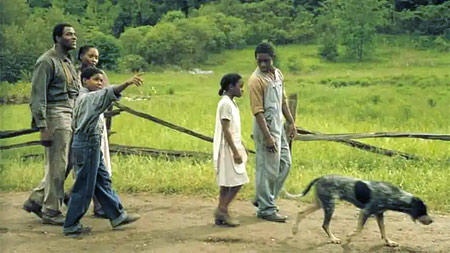 You don’t have to wait for a visit to the pioneer museum to show them a time and place where life was a daily struggle to put food on the table. “Sounder” takes us straight to the sharecropping fields of rural Louisiana during the Depression, when success for many black families was finding a piece of meat to add to the stew pot.

The award-winning children’s book and the 1972 film were named after a dog, but the good dog Sounder plays a bit part in this methodically paced family drama. Eldest son David loves to hunt raccoons with his father (the magnificent Paul Winfield) and enjoys the freedom of rural life, even as his family fights brutal poverty. Pop soon steals a ham, and the sheriff drags him off to the work farm.

It may be hard for your children to imagine, but making the mental leap will open their minds: This family has no money, no car, no education, no power to demand answers. If David wants to visit his father in prison, he must trek for days across country, looking at a map he can’t read.

David stumbles across a school for black children, something he’s never seen, and suddenly his life has the chance to move in new directions. Meanwhile, director Martin Ritt soaks us in the heat, the beauty, the racism and the buzzing cicadas of Louisiana. “Sounder” was nominated for best picture and a host of other awards, including best adapted screenplay, best actor for Winfield and best actress for mom Cicely Tyson.