The Killers, which features a now famous musical score (later used in the "Dragnet" TV series) by Miklos Rosza, is notable as Burt Lancaster's film debut. The ace crime director Siodmak uses the bare bones of Hemingway's terse story to build a taut and fascinating tale of murder, robbery, and betrayal. It also features one of the genre's most celebrated femme fatales. 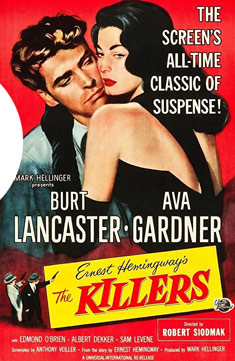 It opens with the killers of the Hemingway story (Charles McGraw and William Conrad) entering the diner in search of the Swede (Lancaster). They have a murder contract to fulfill, they learn that he will soon be coming in for dinner. Nick Adams (Phil Brown) overhears the killer's intent and runs to a boarding house to warn the Swede. He listens, but remains indifferently on his bed, explaining simply "I did something wrong... once". With that he quietly awaits his fate. The Hemingway story ends about there, but this is only the beginning of the film. Edmond O'Brien is Jim Reardon, an energetic insurance investigator whose company has to pay off on the Swede's death. By interviewing the Swede's associates, Rearden begins the laborious process of reconstructing the dead man's turbulent life, a process we see through a series of extended flashbacks.

Based in part on the 1927 short story of the same name by Ernest Hemingway. 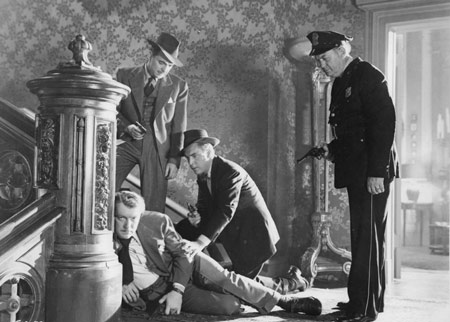 Already 33, Burt Lancaster makes an enormous, electrifying impact in his film début as the former boxer Ole ‘Swede’ Andreson, whose murder by two professional killers is investigated in a series of flashbacks by an insurance investigator called Jim Riordan, with, rather surprisingly, gun at the ready. He pursues the case, with the help of Police Lieutenant Sam Lubinsky, against the better judgement of his rather easy-going boss, R S Kenyon (Donald MacBride), who considers it a trivial matter.

The 24-year-old rising star Ava Gardner makes an alluringly devastating and deadly femme fatale as Kitty Collins at the centre of the troubles. Edmond O’Brien as the dogged insurance investigator Jim Riordan, Sam Levene as the sincere detective, Police Lieutenant Sam Lubinsky, and Albert Dekker as the devious mobster Big Jim Colfax are particularly effective among an admirable ensemble cast. O’Brien is third billed but he has the main role, while Lancaster receives top billing, followed Gardner. These two may be more showy and alluring, but they are off screen a lot of the time – it is ages till Gardner appears – and O’Brien has to anchor the film, which he does effectively. 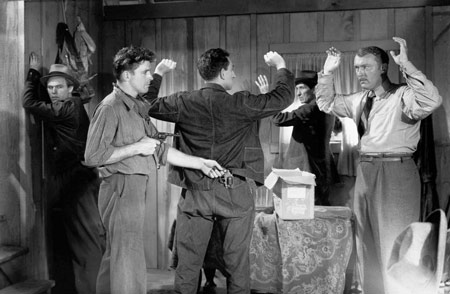 Charles McGraw and William Conrad (in his first credited role) are also in there for the right noir atmosphere as chilling Al and Max, the nasty pair of hired killers who have come to hunt ‘Swede’ down at a small town where he is working as a gas station attendant. The Swede is expecting them and does not try to run. Virginia Christine, who plays Lilly Harmon Lubinsky, also appears in Don Siegel’s 1964 remake The Killers in a different role as a blind secretary. Also in the cast are John Miljan, Vince Barnett, Charles D Brown, Donald MacBride and Phil Brown.

John Huston (uncredited because of his contract with Warner Bros) helped to hone Anthony Veiller’s fine screenplay, co-written by Richard Brooks. Other aces in the pack are a memorable Miklós Rózsa score and Woody Bredell’s startling and brilliantly imaginative black and white cinematography. The movie has style written all over it.

Producer Mark Hellinger paid $36,750 for the screen rights to Hemingway’s story, his first independent production. Hemingway, normally disgusted with Hollywood’s adaptations of his work, was an admirer of the film, apparently knowing a good thing when he saw it. Hellinger arranged a private screening of the just completed film for Hemingway, who had a pint of gin in one pocket of his overcoat and a pint of water in the other so that he could sip from them if the film got bad. After the screening, he held up the full bottles, grinned and said: ‘Didn’t need ’em!’

The first reel, or first 20 minutes, is a close adaptation of Hemingway’s 1927 short story, using his dialogue, but the rest of the film, with Reardon’s investigation of Swede’s murder, is original.

The astonishing boxing match in the third flashback was filmed in a boxing arena with 2,000 spectators. Lancaster trained for two months with a boxing champion and played the part of the Swede with great realism against a real boxer. All this spectacular work, but in the end the boxing is irrelevant to the plot.

The Killers was selected for preservation in the US National Film Registry by the Library of Congress in 2008 as being culturally, historically, or aesthetically significant.