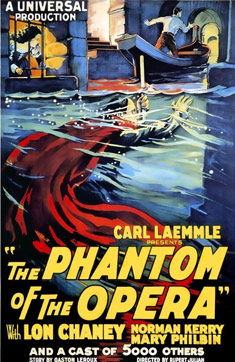 In this silent horror classic, aspiring young opera singer Christine Daaé (Mary Philbin) discovers that she has a mysterious admirer intent on helping her become a lead performer. This enigmatic masked presence is Erik, also known as the Phantom (Lon Chaney), a horribly disfigured recluse who lives underneath the Paris Opera House. When the Phantom takes Christine prisoner and demands her devotion and affection, her suitor, Vicomte Raoul de Chagny (Norman Kerry), sets out to rescue her.

One of the landmarks of silent cinema, this adaptation of Gaston Leroux’s novel was also the film that firmly cemented Lon Chaney’s standing as a superstar as well as set the stage for Universal Pictures to continue producing definitive horror classics throughout the 1930s and 1940s. 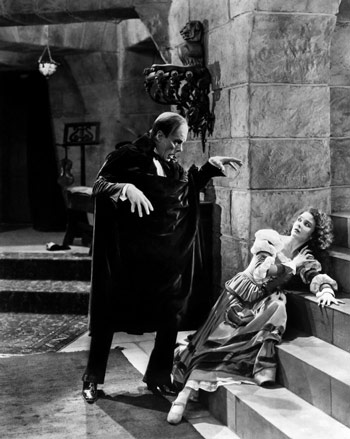 If it wasn’t quite the match of the fright fests that were being made over in Europe during this decade (Nosferatu, Haxan), it was certainly one of the most epic American undertakings this side of D.W. Griffith and Cecil B. DeMille, with the Paris Opera and surrounding streets beautifully recreated on the studio lot and populated with that literal cast of thousands.

There have been over a dozen screen versions of the story, but not one of the subsequent actors to essay the role of the Phantom — among them Robert Englund and Gerard Butler — came close to matching Chaney’s brilliant portrayal. (Best among the runners-up was Claude Rains in the 1943 interpretation, largely playing up the tragic rather than horrific dimensions of the character.)

Chaney, who also created his own makeup, is mesmerizing as Erik, the disfigured underground dweller who won’t let anything stand in the way of his love for a singer named Christine (Mary Philbin). The picture suffers whenever Chaney’s not around, but his string of remarkable sequences — including his unmasking at the organ and his entrance at the costume ball — make up for any shortcomings.